Mt. Bierstadt and Mt. Evans: A Tale of Two Mountains 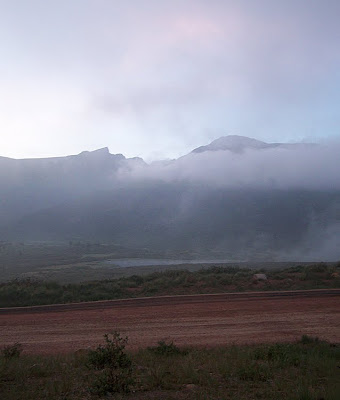 I'm not a fan of the overused "A Tale of Two..." allusions to Dickens famous novel, but the title seemed appropriate for this day in more ways than one. First of all, Mt. Bierstadt is a true fourteener, with a beautiful trailhead and a quiet summit, while Mt. Evans (which boasts the "highest paved road in America") has the over-exploited feel of a raucous amusement park ride. The "Tale of Two Mountains" cliche is also applicable to our experience on Bierstadt and Evans because of the two very different experiences we had: an exciting, wonderful ascent and a grueling, despairing descent. Regardless of these negatives, our experience on these two mountains was one of the most memorable climbs of the summer, and a day I wont soon forget.

The day after a relatively easy stroll up Grays and Torreys Peaks, we made it to the trailhead for Mt. Bierstadt high on Guanella Pass feeling tired but invigorated by excitement. Guanella Pass is a beautiful area, and the trailhead is at a lofty 11,669'. The lush landscape around us was socked-in by glorious tumbles of fog, and the air was crisp. The famous shape of the Sawtooth (the augural moniker for the connecting ridge between Bierstadt and Evans) loomed through the haze, looking as menacing and terrible as its namesake.

Sunrise over Mt .Bierstadt (right) and the Sawtooth: 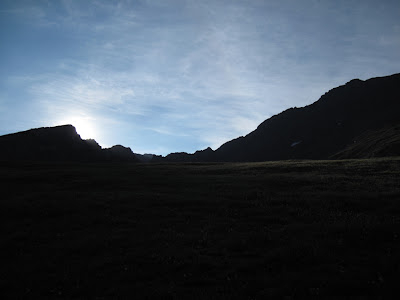 The hike up Bierstadt was easy and relatively short. A few climbers were spread out above us, and a long line of cars/people were amassing behind. In less than three hours we achieved our first summit for the day. I quietly celebrated my twentieth fourteener.

View to the southeast from near the summit of Bierstadt (the white in the background is a thick coating of fog): 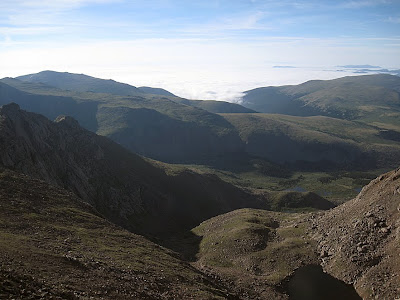 Ella finishing her ascent of Bierstadt: 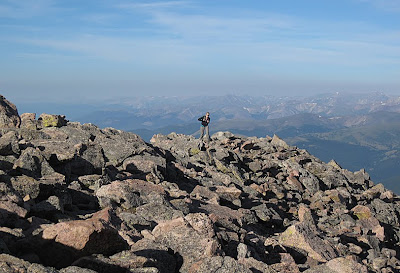 View to the west toward Guanella Pass (Grays and Torreys Peaks visible in the center in the distance): 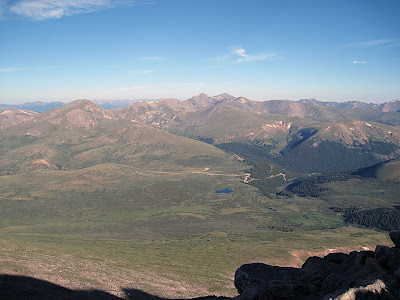 Group photo of the three of us atop Bierstadt: 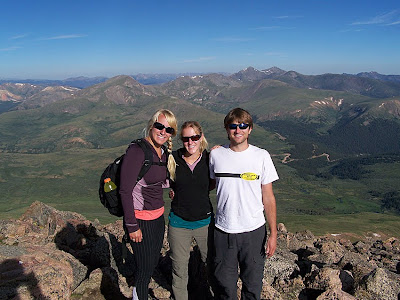 After a few moments' rest, we strapped on our helmets and turned to face the most challenging portion of our day: Bierstadt's famous Sawtooth Ridge.

The view of the Sawtooth Ridge from Bierstadt: 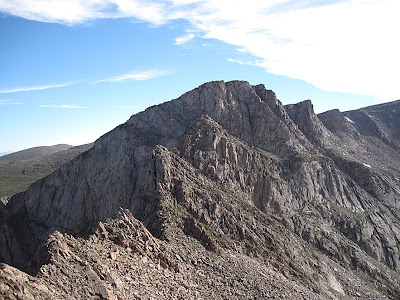 The same photo with the route drawn in: 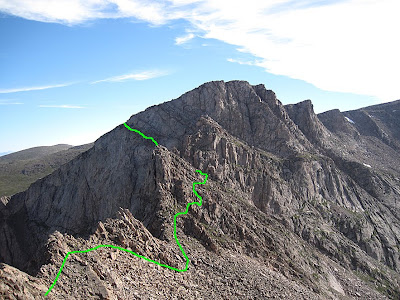 The Sawtooth is a renowned traverse between two popular Front Range peaks. It was also the first official Class III route of our summer. Most of what we'd heard about the route focused the difficulties and exposure of the ascent on the Sawtooth's far end (relative to Bierstadt) and said little about the descent on the near side. As a result, we were surprised to find challenging class III terrain almost immediately upon departing the summit.

The first obstacle was a steep, loose gully descending north from Bierstadt. We had to be cautious with each step not to slip or stumble or loosen rocks onto each other. Near the ridge's low point we had to traverse across an exposed face, pressing ourselves against a cliff and tiptoeing across a tiny ledge above a tall drop. At the bottom of the Tooth, we approached the crux section (the part we'd read so much about) of our day: a tall series of broken cliffs and ledges with extended class III climbing and class IV variations.

Approaching the most difficult section of the Sawtooth: 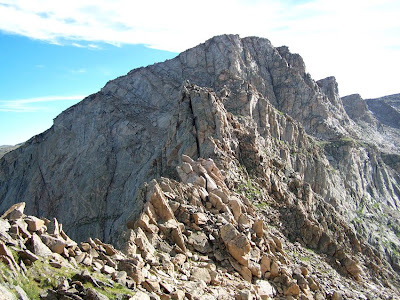 The next half-hour was exemplary of the great joys of semi-technical climbing. We had to tediously investigate our route, searching for breaks in the mountain's defenses. We had to plan ahead to avoid stranding ourselves on dead-end ledges. We had to focus on hands, feet, and rock to assure that all were working together in harmony. Each and every movement was an exercise in skill and focus. This type of climbing was a far cry from the numb ascents of solid trails that had dominated much of our fourteener experience to this point. For the first time in the summer, in many ways, we felt like true mountaineers.

The crux section of the climb: 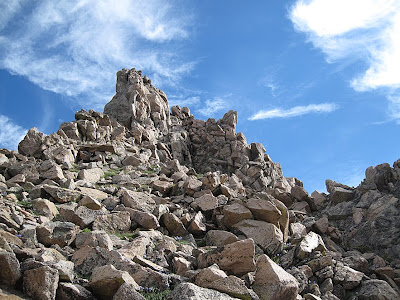 Too quickly, we reached easier terrain, and the difficult scrambling was over. We took a short respite and scouted the next (still interesting but less technical) portion of the climb. Here the route maneuvered left onto the vertical west face of the Tooth's most jagged promontory via a narrow, gravel ledge sandwiched between tall cliffs both above and below. We watched with some trepidation as several climbers ahead of us carefully negotiated this tremendously exposed section.

Ella and Michelle resting before the last portion of the Tooth: 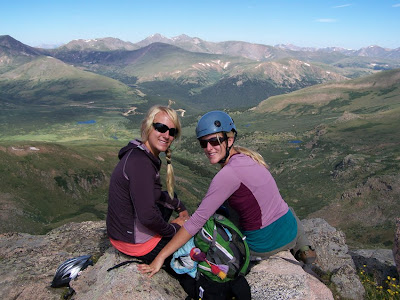 Our fears about this portion, it turned out, were mostly in vain as the ledge was wider and more stable than it initially appeared. The climbing did not exceed class II, and as long as we did not focus too intently on the airy drop to our left, the exposure was not problematic. This would not be a comfortable place, however, for someone afflicted with acrophobia. 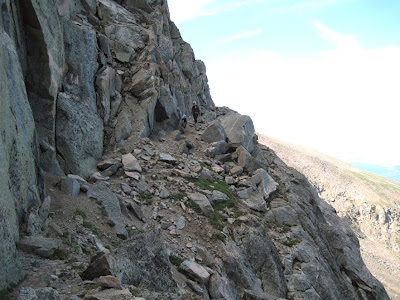 Another climber overlooking a drop into oblivion: 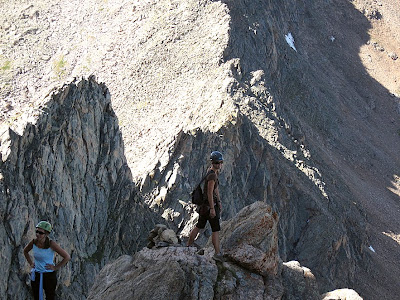 Once past the exposed ledge we were on the west ridge of Mt. Evans, and we convinced ourselves that we had little more than a simple stroll to the summit. This stroll, however, turned out to be hotter, longer, and more tedious than anticipated. It took the better portion of an hour to accomplish.
At long last we crested the final ridge, and the view of Mt. Evans' summit opened before us. To our surprise we were greeted by the chaos of a bustling endpoint of a busy bike race. Standing abreast of the finish line was one of the race's officials, encouraging the riders with proclamations such as: "You can do it! Only a few more feet" or "You're almost there!" Her encouragement, we took the liberty of assuming, was actually meant for us. 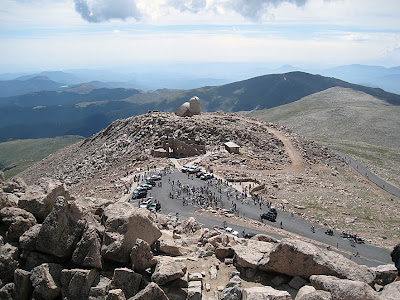 The summit of Mt. Evans is like a different world compared to the rest of the mountain. It is, in fact, an anomaly in a sea of quiet, amazing Colorado mountaintops. A paved road achieves it. It is festooned with an observatory and summit house. It is so well equipped, in fact, that I was able to un-encumber my bladder in the relative luxury of a summit bathroom.

A mountain goat who stood by uninterested as I waited in line for the summit privy: 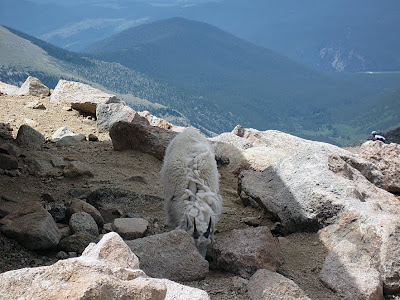 After lounging amongst the rocks for nearly an hour looking down on streams of bikes careening both up and down the mountain, we turned our backs on the scene of Mt. Evans' summit and began the long descent.

While undertaking this long downclimb, however, what had been one our best, most-enjoyable days of the summer took a sour turn.

The descent route (we didn't have to return over the Sawtooth) took us down an unpleasant gully that was a loose, tedious, and treacherous bowling alley of rubble and scree. We had to descend to a point lower than the trailhead and engage in the infamous Bierstadt willows (a muddy slog through bug-infested marshes and clawing, scratching brush). To complicate matters, the afternoon thunderstorms arrived on schedule, and we spent the last mile being pelted by harsh rain and stinging hail while searching for an often non-existent trail. Lightning crashed like the snarl of some great minion of Hell, and when we finally reached the car the air was statically charged with enough sufficiency to lift our hair straight from the tops of our heads.

Back at camp, foolishly thinking the worst was behind us, we were dismayed to discover four inches of hail piled against our tent and our sleeping bags resting in a pool of water several inches deep. These tribulations, however, were only a small price to pay for a great day spent teetering on the blade of a saw.

This waterfall was the only high point of an unpleasant descent: 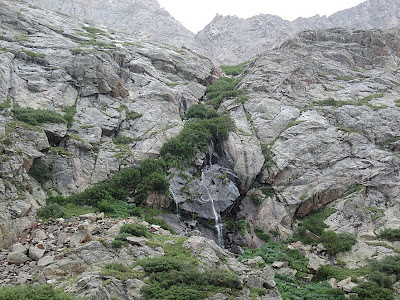 High-alpine flowers on the slopes of Mt. Evans: 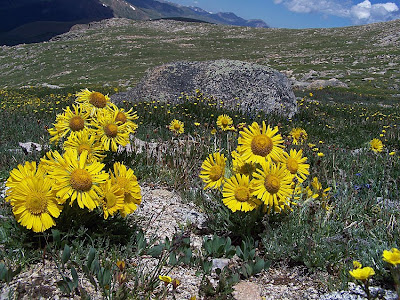 Posted by Writers on the Storm at 9:11 AM