Mt. Sopris: A Mountain and a Totem 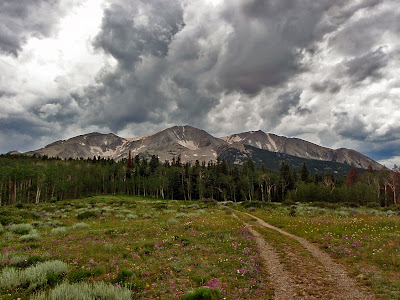 By many measures Colorado’s Mt. Sopris is a minor mountain. It’s not a fourteeneer. Hell, it’s not even a thirteener. At a paltry 12,953’ (3948 m) it is the 688th tallest mountain in Colorado. The twin-summit massif forms the relatively low, northern shoulder of the mighty Elk Range. It is overshadowed by famous neighbors: Snowmass Mountain, Pyramid Peak, Capitol Peak, and the Maroon Bells. Despite all of this, however, Mt. Sopris will always be one of my favorite Colorado Mountains. If you were to rip Mount Sopris from the surrounding area and place it next to any of those other Elk Range favorites, Sopris would dominate. It is simply a massive mountain. 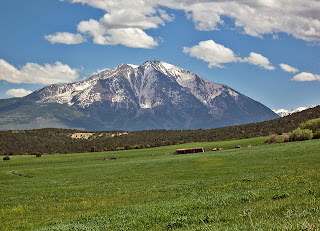 The view from the north, like when traveling from Glenwood Springs to Aspen, Co on Highway 82, reveals Sopris for the mighty mountain it is. The town of Carbondale, which sits at Sopris’s northern foot, lies at an elevation of 6,181’, giving Sopris almost 7,000’ of relative prominence. The spectacular northern aspect of Sopris towers over the lower Roaring Fork Valley and has become a symbol for the area. Having spent a good portion of my childhood living in this part of the state, Mt. Sopris will always be a mountain that, in some strange way, offers a definition of who I am. No matter what great mountains I have the fortune to climb in my life, Mt. Sopris will always be high on my list as a favorite.

We began our hike at the standard Dinkle Lake trailhead, not far outside of Carbondale, CO, on the northern flank of Mount Sopris. It was early afternoon and a few other hikers were active in the parking lot as we were, tugging bootlaces tight and making last second adjustments on their backpacks. We had decided to climb the mountain at a leisurely two day pace in order to maximize the amount of time we spent in this beautiful area. After shrugging our packs on, we turned our backs to my subaru and started up the trail towards the mountain.

The first part of the approach is on an old road, so the path is wide and mostly straight. The four of us marched up the trail, talking excitedly with the anticipation of a good summit the following day. After hiking for almost an hour and gaining a thousand feet, we came to a clearing in the trail where we encountered a hippy-looking couple with their dog on descent. They stopped us as we drew near, pushing their sandwiches on us at $5 a piece. Who would have thought? A trailside concession stand! We politely refused and wished them a pleasant descent.

Sopris towered above us, and big, gray clouds were building to the south and west. We weren’t terribly concerned yet, as there was no sign of lightning or thunder. It did, however, seem likely that we might see some rain before the day was over. But we were ready for this; afternoon summer rain is part of alpine life.
At around 9,800’, we re-entered the forest for the final section of the approach. By then I was regretting not training more with a weighted pack on. My shoulders ached and my back was stiff. And I only had two days worth of gear. Sweat poured from my limbs the last mile.

At last we reached the established camp sites huddled between and around the two Thomas Lakes. It is only legal to camp at designated sites, which are numbered with small placards. We chose site 4. Site 4 had no direct lakeview but was huddled amongst the trees out of sight from the trail. It was comfortable and private.

After setting up camp we hiked around to the backside of the lake to relax for the evening. We found a place among boulders to the east overlooking the lake. The view of Sopris was inspiring. As the day faded into evening, the only downside was a sudden onslaught of mosquitoes. Apparently, our outing had un-fortuitously coincided with some sort of mega hatch. I had never experienced such a swarm of mosquitoes like this at Thomas Lakes, and rarely anywhere else. I found myself hoping for an all inclusive extinction of their species. I suppose every creature on earth serves some function, but what, besides utter irritation and misery, does a mosquito contribute? While other members of the group, however, complained that their shell-layers were not sufficient in repelling the needle-like proboscises of the mosquito swarm, they were not able to get to me through mine. Black is supposedly a bad mosquito color, but when my hood was pulled tight over my head they seemed too interested in swarming the impenetrable Gore-Tex than going after my face or ears. 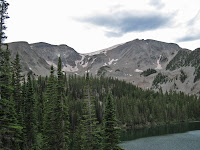 We relaxed by the lake for quite a while before negotiating the trail back to our campsite. We still had enough light to cook a large and satisfying spaghetti dinner and play a game of travel scrabble. The storm that had seemed to be building all afternoon had swung to our north, giving us no more than a light drizzle. We set our alarms for 4 am and went to bed early. It’s always better to get an early start for an alpine climb. Even though we were at 10,200’ and the summit was only very manageable 2,700’ above us, and we knew we would be able to make good time on the summit ridge, we wanted to give ourselves every chance possible to make the summit successfully if the afternoon brought any weather. Sopris is a notorious lightning-rod.

Four a.m. proved to be everything that you’d expect: cold, dark, exhausting. But it was also thrilling to know that most everyone else we knew was at that very moment asleep in their beds while we prepared to climb a mountain. After a quick breakfast we hiked around to the backside of the lake and filtered water for the summit attempt. It was deep black; dark enough that without our headlamps very little could be made from the mud of night. The sky was a little overcast too, filtering the moon and starlight. It was almost five o'clock by now, however, and the sun was fast approaching. In the twenty minutes or so that it took for us to fill all of our water bottles the sky was already turning purple and blue with light.


Once we left the lakeshore, the next portion of the trail snaked through the fading alpine forest and onto the east ridge of Mt. Sopris. In a sense, we had finally reached the mountain.

We passed treeline not much farther and faced a long push up a sometimes distinct sometimes not trail through the scree. A couple of sections were moderately steep, and we could hear layers of rocks shifting beneath us. Still, I never like a slip would lead to a catastrophic tumble. Soon, Capitol Peak appeared to the south. The changing light of the morning illuminated this powerful peak. The rest of the Elks extended out to the horizon. The Elks provided an impressive array of color: red sedimentary layers, the same that construct the world famous Bells; green grasses and pine canopies; dark gray shales; and even the white snowfields that that still freckled the landscape. To the north we could peer down the rock glaciers of Sopris’s north face to Thomas Lakes, which were tiny now from above.


At about 12,500’ we surmounted the eastern false summit and dropped down to the saddle between it and the east summit of Mt. Sopris. A patch of high alpine grass seemed an inviting place for a snack, and we relaxed here for a minute before making our final push. Morning had arrived in full.

The last part of the climb was steep but not overly strenuous. There was one more false summit to navigate before arriving on top. At 7:30 am, we reached the Sopris’s 12,953’ summit about the same time as everyone in town below us was waking up. We made a few calls to friends and family on our cell phones and listened to their disbelieving exasperations: “You are on top now!?!” I wondered if they looked with a strong enough telescope, perhaps, if they could see us.


We debated attempting the identically elevated west summit but decided that we were too worn out to continue. To do so would require another mile and a half of climbing and over 500’ of extra elevation. Clouds were already building, and it seemed that today would be one of those days when the mountain would fall under assault from the weather earlier than usual. We would simply have to return and climb Sopris again.


The descent went, as usual, much faster than the ascent. We passed many groups of people on their way up, most of whom were shocked that we had made it all the way to the top and back before 8 am. We made it back to our tents around 10 am and we took a nap before packing it up and hiking out.

As we hiked out, we felt excited that we had climbed Mt. Sopris, the totem for the Roaring Fork Valley. It was hard in subsequent days as we returned to our daily lives not to pause and look up at Mt. Sopris from town. Our eyes were inexorably drawn to it. Sight feels limited in the low-lying valleys when you know how far to the horizon you can peer when standing on top of a mountain.

Posted by Writers on the Storm at 8:00 AM