5.9 Ain't What it Once Was: An Exploration of Grade Inflation in the Yosemite Decimal System

The Yosemite Decimal System is a complicated entity fully worthy of dissertation-like exploration. But the YDS is an empirical system not a intellectual one, and any attempt to reduce it to research and discussion is bound to be flawed. If you are new to the Yosemite Decimal System, a good place to start is our article from January 2012 that provides a basic understanding of its history and of its general grade ratings.

There is much discussion, particularly between the older and younger generations, about a particular YDS phenomenon in the climbing and alpine world often called grade inflation. I work occasionally as a route setter at a local climbing wall. After designing and executing a project I was sure (and was confirmed by three other climbing friends, all of which can onsight 5.10 and one of which who can onsight 5.12) was 5.10b/c, a climber that was 48 years old and has several decades of climbing experience suggested 5.9+ as the rating. Surprised by this, I voiced my doubt and had him try another climb nearby which I originally rated 5.11a but after a few ascents downgraded to 5.10d. Again, this was confirmed by the same three friends. After struggling a bit but finishing the climb, this 48 year old climber suggested once again that this climb was 5.9+, only adding this time that it was "maybe" 5.10a. I was shocked, and this time I protested saying that this rating was simply impossible. After a lengthy discussion, at best I could convince him that it was at least 5.10b but he would concede no higher. While I was thinking "sandbagger," he suggested perhaps the difference was due to "a different generation" in a smug tone I interpreted as elitist.

While this encounter is not proof of anything other than the subjective nature of any grading scale in general and the Yosemite Decimal System here in particular, it got me wondering about the familiar theory of grade inflation all over again. Does it exist and why? Visit beta websites that allow users to vote for "consensus" ratings on routes such as Kor-Ingalls on Castleton Tower or The Mace near Sedona, Arizona that were established several decades ago or more and you often find that the new consensus is higher, sometimes considerably, than the original suggested rating. Is it that modern climbers, influenced by the safety of clip and go sport climbing, have been softened by the loss of "boldness" from the mainstream climbing realm? Or that many climbers climb for years and never learn to place a cam or a piton? 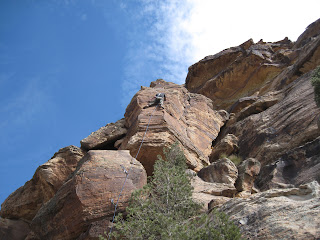 While considering this question, my research took me to a broad spectrum of places. In order to understand the issue of grade inflation, it seemed vital to understand its history. As noted in our history article, the YDS scale was invented at Tahquitz Rock as an extension of the Sierra Club's terrain rating scale that was used to grade alpine routes of all levels (class 1 being trail walking and class 5 being technical climbing). Ratings were established from 5.0 (easiest technical climb) to 5.9 (hardest technical climb at the time). The climbs at Tahquitz Rock, therefore, became the baseline routes by which all others would be compared. However, when you review the history of the rating at Tahquitz, you find a peculiar thing: the original ratings, the ones that were supposedly designed to anchor the entire system, have migrated slowly and steadily upward.

White Maiden's Walkaway on Tahquitz Rock's Maiden Buttress is an 800 foot multipitch trad route that was established in 1937 as one of the baseline routes at the 5.1 rating. Subsequent guidebooks over the years show that the rating has slowly risen to 5.3 then 5.4 and now some guidebooks list it 5.5. A survey of the consensus votes on one popular beta website reveals that one quarter of the climbers suggesting 5.6. Has the scale really bumped five number grades? Would that mean that modern 5.15 is simply what 5.10 was in 1937? The short answer is yes... and no.

The truth is the scale has inflated. As it has been refined, the higher grades have become more important and useful by modern standards. After all, many climbers today will lead their first climb at 5.6 or 5.7. The difference between 5.0 and 5.2 is almost indistinguishable. In truth, everything from 5.0 to 5.4 is a vague blur and often seems to overlap with class 4. In the days before the scale was opened to the mathematically illogical 5.10 rating (subverting the notion that class 6 climbing was aid climbing) in the early 1960's, when a climber encountered a climb that was at the very limit of the time it had to be rated 5.9. Sometimes the most devious of these would get a feeble 5.9+ modifier. That's not to say all 5.9's were the same, they just had no other rating to apply to these cutting edge climbs. When the scale finally opened, it was ultimately refined and slowly expanded as the sport advanced.

Today, the YDS and other scales are continuing to expand together. The YDS and the French scale, for example, have locked in step progressing at identical increments as a small group of international climbers establishes and confirms new futuristic climbs. As the grades expand slowly, one letter increment at a time, and benchmark routes are established at the new grades, the scale(s) have become more refined than in the older days. The aforementioned grade inflation does not seem to occur at these higher grades, and certain routes that have been held up as examples of certain grades have rarely changed over the years. If anything they tend to get downgraded as the beta develops and more ascents are made.

What all of this seems to mean is that modern climbers are not soft compared to their predecessors, despite the explosion of popularity in the safer mode of sport climbing. What the sport climbing explosion has allowed for is climbers to focus on pure difficulty, and people are sending routes that those who established the YDS scale could never have imagined 80 years ago. While the lower end of the scale might be softer than it was decades ago, the upper end of the scale has now been pushed higher than ever in all aspects of the sport, not just in bolt protected sport climbing. The so-called world's hardest off-width, The Century Crack (5.14b), was free climbed in Canyonlands National Park in Utah in 2011, as well as the hardest trad line in famed Indian Creek: Carbondale Short Bus (5.14- PG-13). Bold alpine first ascents have occurred in the Ruth Gorge in Alaska and elsewhere across the world. Alex Honnold soloed Half Dome, El Cap, and Mt. Watkins in a single day. While the sport has gone mainstream and become safer in many ways, boldness is still very much alive and rewarded. Though grade inflation has occurred notably over the decades in the lower grades, the higher grades have remained relatively stable, only expanding as new generations are able to push the sport further and further into the future.

Posted by Writers on the Storm at 8:45 AM