The Decalibron: Or How to Climb in a Hurricane

miles hiked: 6.8
elevation gained: 3,444 feet
The Decalibron [De(mocrat)ca(meron)li(ncoln)bro(ss)n], as Gerry Roach's classic guidebook Colorado's Fourteeners calls it, is the only reasonable route on any of Colorado's fourteeners where you can climb four mountains in one day. Several of our friends and family members, when viewing our itinerary, commented that it seemed "over-ambitious" to attempt four 14ers at once. The truth is that, on a normal day, this loop is probably an easier hike than many single mountains in the Sawatch Range.

Today, however, was not a normal day.

We reached the trailhead at Kite Lake at 5:45 in the morning, anticipating a long, arduous climb and hoping to get an early start so we could finish before the weather turned sour in the afternoon. It was a cold, windy morning, and we hit the trail just before six, winding our way along the icy trail toward the saddle between Mt. Democrat and Mt. Cameron.

The view back toward Kite Lake from the first part of the trail: 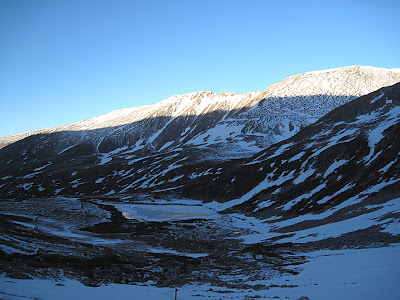 After just under a mile and half of twisting and turning our way through scree and ice, we arrived at the 13,380' saddle and were rewarded with a dramatic view of the Tenmile/Mosquito Range to the north. We could clearly see Mt. Quandary and other rugged, impressive summits.

The view from the 13,380' Democrat/Cameron saddle (Quandary is the big peak on the right): 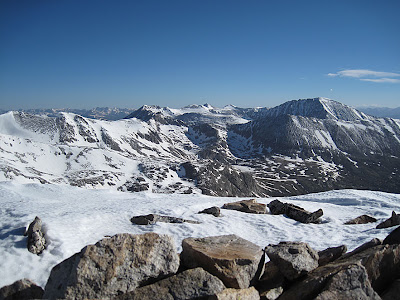 and to the northwest: 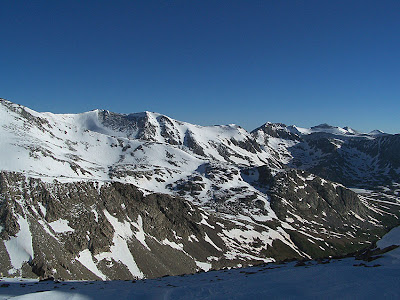 It was windy but manageable, and after a short break we turned west up the ridge towards the summit of Mt. Democrat. Here the climbing became much steeper and more interesting. To the north the mountain dropped precipitously, and with the heavy wind we adopted a technique of spreading out our ski poles and crouching low during the more intense wind gusts and marching upward during the short lulls between. The trail was steep and icy, and we decided to put on our crampons for better traction. Slowly but steadily, we made our way to the summit of Mt. Democrat.

Ella struggling her way to the Democrat summit: 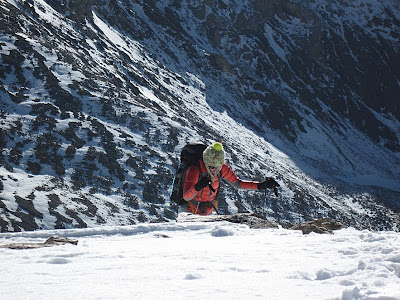 At the summit the wind changed from being a nuisance to being a little frightening. Neither of us dared to stand for any length of time, and we had to be careful when rummaging through our bags not to let any of our gear catch the wind and take flight off the mountain. Because of the intense wind, we considered hiking down after Democrat and returning tomorrow to complete the loop. After a short debate, however, we decided that we had come too far to stop now. This was a decision that we would come to regret.

me on the summit of Mt. Democrat: 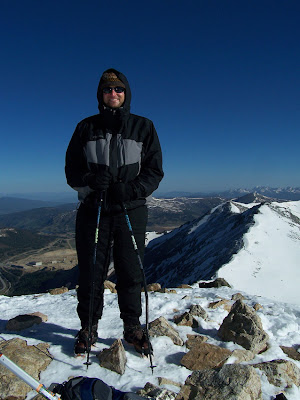 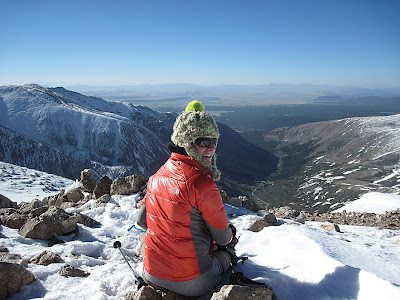 While descending back to the saddle we encountered two new friends we had made climbing Quandary two days earlier. It's a small world above 14,000 feet! Crampons made the icy descent far easier, and we were feeling good when we reached to the 13,380' saddle. The wind seemed to be dying off, and the decision to continue the climb seemed reasonable. We had a quick snack and began ascending Cameron's west ridge. 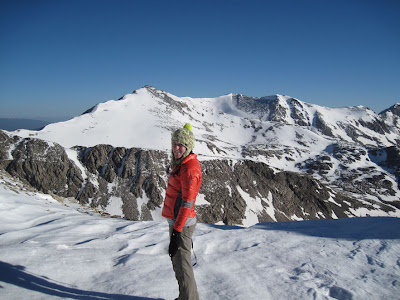 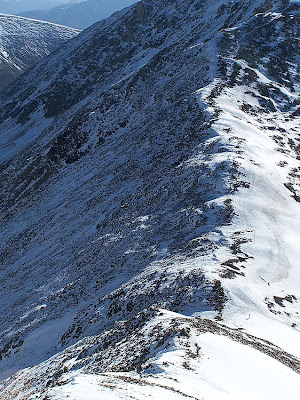 Unfortunately for us, the break in the wind was only temporary and gusts gradually intensified as we ascended. Our technique of dropping to all fours for stability when confronted by the stronger gusts became a ritual we now relied on. The power of the wind was enough to nearly knock us over, and the exposure to the north was becoming more and more intimidating. The possibility of being blown off the mountain seemed very real. But our progress towards Cameron's summit was slow and steady, and we still felt confident in our ability to complete the four-mountain day.
Our pleasant day, however, took a sour turn on Cameron's summit. The powerful gusts had now turned into a constant blast, strong enough that neither of us felt comfortable standing for more than a few moments. We could see Lincoln's summit not far to the northeast, but the prospect of climbing in gale-strength wind was unpleasant. We decided once again, however, that we had come too far to turn back. We tightened our jackets and started towards the final climb.

Ella with a wide stance on Cameron's summit to keep from blowing away: 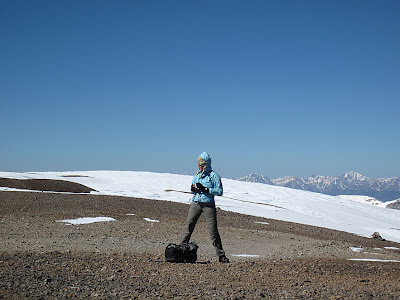 me trying to find something to smile about on Cameron's summit: 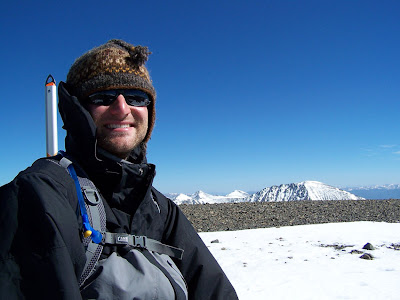 me looking melancholy with the last ridge to Lincoln visible in the background: 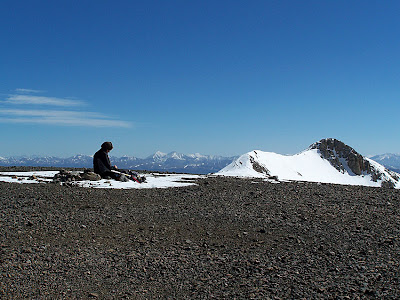 It was on the last ridge to Lincoln that we encountered the strongest wind of the day. I read when we got down from the mountain later that a person will have trouble standing in wind blowing around 70 mph. This was surely the case for us, and we spent more of our time crawling than walking. I had experienced wind in the 40 mph range but never anything like this.

At an ant's pace, we struggled up to Lincoln's false summit. The most intense  wind now had become constant. Gone were the days of dropping to all fours to wait out the more powerful wind gusts. Later that afternoon, I discovered after plotting my GPS data for today that we had had less than a tenth of a mile in distance and forty vertical feet to climb when we decided to turn around. The thought of being on that summit in hurricane-force winds was enough to deter us from making the final ridgline. It was sad to be so close, but without a doubt the right decision to turn back.
The day had gone from being fun to frustrating to downright horrific. This was easily one of the most-bizarre and scariest moments I have had while mountaineering. I hope never to have another day like it.


Mt. Lincoln's summit (we made it to the false summit on the left): 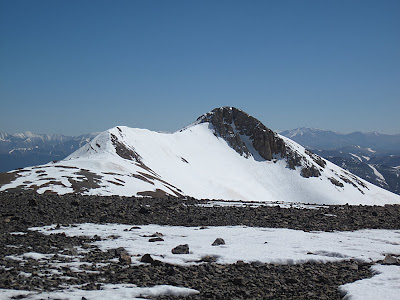 Now we were faced with a tough decision: how to get off the mountain. We could either return the way we had come back up and over Mt. Cameron and down its tedious west ridge, or climb the shorter route up Mt. Bross and descend directly back to Kite Lake. Both options seemed bleak, but we decided eventually on the latter. Although we would have to climb back (once again) over 14,000 feet, it was a shorter hike. We were ready to be back at the car. We traversed along the west face of Mt. Bross without even considering doing the twenty-minute sidetrip to its summit. Checking off summits was beyond the point now, we simply wanted to get off the mountain with souls and bodies intact. The sound of the wind roaring up the basin was deafening, like standing behind a 747 as it kicked into gear for liftoff. Sometimes you could hear the bigger gusts ripping toward you a moment or two before you felt them, giving you just enough time to drop to your hands and knees for balance.

The horrible wind was nearly constant as we did the agonizingly long traverse along Bross. After an excruciating hour and a half of traversing, we finally turned down the gulch on Bross's southwest face. It seemed at this point that the nightmare would never end. 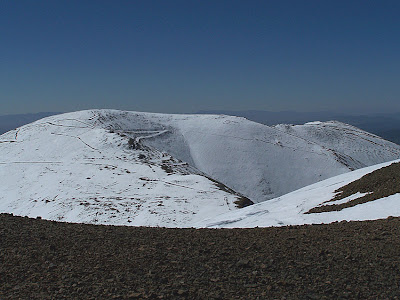 Eventually, we made it to our car at Kite Lake. I couldn't remember having been so thankful to get inside a vehicle. We could laugh at the crazy experience we had just had now that it was over. It was easily the most strenuous, most difficult, and most frightening day of mountaineering that I have ever experienced. I hope to never have to face such wind on a mountain again. In retrospect, not all was lost. We learned a valuable lesson about ourselves and about mountaineering.

The forecast for tomorrow is more of the same, so it is likely that Ella and I's first trip of the summer could be coming to a conclusion three summits short of our goal. I don't feel, however, as bad about this as I could. We have had a great time already, and there is plenty more to come. The reality of mountain climbing is that you never conquer a mountain, as some people like to claim, but that the mountain is simply kind enough to let you pass. We can only hope for better luck for the remainder of the summer.