A Guide to the Yosemite Decimal System


I am often asked by friends new to mountaineering or climbing just what the grade numbers mean. What is the difference between class 3 and class 4? What is the difference between a 5.7 climb and a 5.10 climb? Just what is a 5.15? And what about those letters? Is it really possible to accurately and effectively subdivide a grade like 5.10 into four, lettered subgrades? Not to mention Aid and protection ratings and the vague Roman numeral grades. This article is an attempt explore a very complex and dynamic grade scale that is the Yosemite Decimal System for grading terrain.

You hear a lot of numbers thrown around in discussions of route difficulty. It's important to remember that any attempt to reduce something as complex as a mountaineering route to a few numbers is bound to be flawed. Any class rating is an oversimplification at best and is certainly not capable of telling the full story about the route you will experience. Attitude, body shape, climbing style, etc, will play major factors in a route's perceived difficulty. Difficulty ratings also don't incorporate other issues, such as protection, rock quality, belay/rappel anchors, weather conditions, rock conditions, etc. Difficulty ratings are also subject to local interpretation, and you might here terms like "soft" or "sandbagged" applied to certain crags. In my backyard, Rifle Mountain Park--a famous limestone sport climbing area--is often called "sandbagged", meaning that the grades climb harder here than other places. 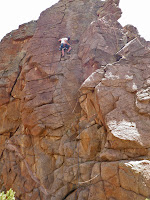 It is also important to note the difference between gym, sport, traditional (trad), and alpine climbing. A person comfortable at 5.10 on bolts or at the gym may panic on a 5.7 trad climb. Alpine routes especially bring their own unique difficulties, and even low 5th class (which I have labeled as "easy") can be quite advanced considering the length of these routes and the objective hazards of a mountain environment. Always seek as much information as you can before attempting a route. Consult locals, buy route guidebooks, and surf your favorite web-beta climbing site to maximize safety.

That being said, difficulty projections are useful to gain a rough idea of the technical demands a given route will entail. A knowledge of the scale, therefore, is important. Consider the following article as a rough guideline to understanding the current system for grading terrain in the United States. Bear in mind two things about my opinion of these grades: I have a Western Colorado bias, which might compare to your local understanding in different ways. Our climbs might be rated harder than yours, or they might be easier. It is hard to say. The truth is, however, that the only way to really understand a grading system such as the Yosemite Decimal System is to experience the rock and subsequent ratings for yourself.

The original Yosemite Class System was created by the Sierra Club in the 1930's to taxonomize the difficulty of various hikes in the Sierra Nevadas. Class 1 was simple  trail walking, and class 5 was considered technical climbing. It was soon discovered that class 5 encompassed such a large group of rock that it was sub-divided into a decimal system. This decimal extension was created and developed in Southern California to classify the difficulty of various routes at Tahquitz and Suicide Rocks. The "old-school" scale started at 5.0 was capped at 5.9. As climbers and their gear got better, even harder climbs were being sent, and the need arose to open the scale. The YDS scale has now been pushed to 5.15c, though only a handful of such routes exist in the world.


A breakdown of the YDS 5th class subgrades:

Since the YDS system accounts only for the technical difficulty of the hardest move, a need arose to somehow quantify the quality of protection, and therefore safety, of a given route. Consequently, James Erickson developed a safety grade based on movie ratings. It is important to note, however, that these ratings are given with the assumption that the leader has placed gear perfectly as the route allows. In other words, in inexperienced hands ANY climb can get the most dangerous rating.

G: Good. Protection is more than adequate, with placements available to minimize the fall factor. A leader who places gear properly should never be in danger of hitting ledges or the ground in the event of a fall.

PG: Pretty good. Protection is considered adequate, although moments where there is ledge-fall potential may exist. It is rare to see either a G or PG rating attached to a climb, as it is only when a climb is PG-13 or higher is it noted in guidebooks.

PG-13: Moderate. Protection is generally good with perhaps a section where there is potential for a long, risky fall. This rating is often applied when protection for a climb is not totally adequate but not bad enough to merit a full R or X rating.

R: Runnout. Even with perfect gear placements there are long sections of unprotected rock where if a lead climber fell they would be subject to a long, dangerous fall likely resulting in serious injuries.

X: Extremely runnout. Similar to the R rating, only taken to an extreme. If a leader falls on an X-rated climb, death is a real possibility.

The American system also includes a Roman numeral "grade" that attempts to evaluate a climb in terms of both time required and technical difficulty. The grading system attempts to combine factors such as: length, commitment, routefinding, difficulty of hardest pitch, average pitch difficulty, number of technical pitches, and others.

Grade I: Short climb requiring a couple hours or less of any difficulty. Single or two-pitch climbs are usually graded I though the numeral is not usually included on the difficulty rating.

Grade II: Half a day to 3/4 of a day of any difficulty. Most 14er hikes in Colorado are graded as II. Otto's Route on Independence Monument near Grand Junction, Colorado is usually graded II.

Grade III: Most of a day with some technical climbing. Long semi-technical climbs such as Ellingwood Ridge on La Plata Peak in Colorado can also receive a Grade III rating.

Grade IV: A full day of technical climbing with the hardest pitch being at least 5.7 in difficulty. The Casual Route on Longs Peak is Grade IV.

Grade V: Requires a day and a half with the hardest pitch being at least 5.8 in difficulty. Very long multi-pitch climbs often requiring aid climbing. The Yellow Wall on the Diamond is usually graded V.

Grade VI: Multi-day climb with many technical pitches requiring difficult free climbing and aid as well. Most of the famous routes on El Cap in Yosemite are Grade VI as well as climbs such as the Hallucinogen Wall in Black Canyon National Park and the North Face of Mt. Hooker in the Wind River Range.

Note: While the grading system specifically lists criteria such as "takes multiple days," advances in the sport have proven these factors as unreliable. Grade VI routes on Halfdome and El Cap, after all, have been climbed in a day or less by modern pioneers.

The last component you are likely to see in a rating for a climb in the United States is an aid rating. Aid climbing occurs when terrain becomes too difficult for a leader to climb free and resorts to climbing on gear itself, rather than the rock. Pitons, gear grabbing, etriers, cam hooks, etc, are all components of aid climbing. Personally, I don't do a lot of aid climbing as of now, so the following descriptions are greatly in-debted to Mountaineering: The Freedom a the Hills, a book that anyone interested in alpine climbing should own, and several other sources.

A0: Fixed protection in place, such as a bolt ladder. Sometimes when a free climber pulls on a quickdraw or camalot they will say they did some "A0" on that particular climb.

A1: Easy aid placements, and almost every placement is capable of holding a fall.

A2: Generally good placements, but they may be difficult to place. Intermittent bad placements are also possible.

A3: Hard aid. Requires active testing of placements. Each pitch takes a very long time to lead and there is potential for some very big falls, up to around 80 feet or so. Most falls, however, are not particularly hazardous.

A4: Serious aid. Big half-rope length falls with potential for grounding. The vast majority of placements are only capable of holding body weight. In a sense, this is almost like the "R" rating in the safety section.

A5: Placements hold only body weight for an entire pitch. Any lead fall for the entire pitch is going to be factor 2 (i.e. twice the length of the rope that is out) or the fall will directly ground the leader. Comparable to the "X" rating in the safety section.

A5+/A6: Occasionally people have proposed an A6 grade for several climbs, though many deny the possibility that such a grade can exist. Supposedly, and A6 climb is like an A5 with body weight placements for an entire pitch but with bad anchors as well.

Aid climbs can also be rated C0-C5 which means basically the same thing except that a route can be climbed without the use of pitons, bolts, or drilling. This category is called "clean aid". Once a route has gone clean it is expected that subsequent climbers will honor this style and not further mar the rock.

This article, written by Richard Jensen, is an intriguing read and will help provide an empirical understanding of aid climbing. Further investigation of climbing figures like Royal Robbins, Warren Harding, Jim Beyer, Layton Kor and others will help you understanding more about the sport of aid climbing in America and its illustrious history.

Clearly, the system for rating the difficulty of a climb is complicated and takes a long time to master. There is plenty of room for subjectivity and debate. One person's 5.7 is another's 5.9. While some people shun such ratings debates, I actually find them interesting, as long as people do not take them too seriously. True climbers wont waste too much time in rating's debates but instead will be out on the rock, having fun no matter what a climb is "rated". Still, after reading this article you can look at a rating such as IV 5.10c R A3 and have an idea of what to expect from such a climb.

Posted by Writers on the Storm at 6:34 PM