Mt. Sherman: One of Colorado's Easiest 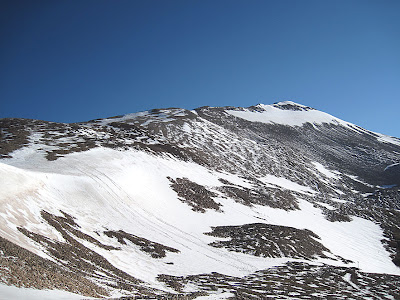 The best thing after a fall, they say, is to get back up on that damn horse. After our “fall” the day before on the Decalibron (and in lieu of forecasts calling for more high wind) we had essentially decided last night to sleep in this morning and call it a week. Just before it was time to turn in for the night, however, the itch to climb returned despite our exhaustion. In a stroke of inspiration, we re-packed our summit bags and set the alarm for the usual 4:00 am. Climbing mountains, after all, not sleeping in, was what we were here for.

When we awoke this morning, the air in Frisco was dead calm. This considerable improvement from the day before was omen enough to convince us to resist the temptation of a lazy morning and proceed Mt. Sherman's trailhead.

After driving up over Hoosier Pass for the second straight day, we made the turn onto the long dirt road up Fourmile Creek towards Sherman's lofty base. The drive was surprisingly smooth, and we were able to get Ella’s Subaru to nearly 12,000’. Though I’m not normally a fan of high trailheads (I prefer to climb mountains, not drive up them), we were at the frayed end of our proverbial ropes both physically and mentally after yesterday’s tribulations, and I was more than happy to abridge our day climbing Sherman. The dark side to the morning, however, was apparent from the moment we stepped out of the car and were greeted by eerily similar morning winds to the day before (let the second-guessing begin). 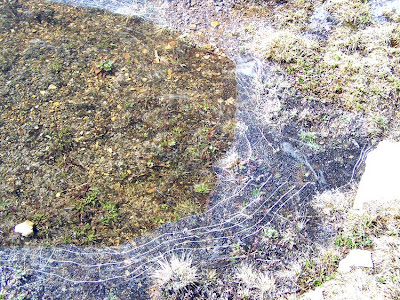 The first mile and a half of the climb coursed along old mining roads to a beautiful basin at 13,000’. Though I usually find the scars of Colorado's former mining industry repulsive, here the derelict remains of a 19th century mining operation oddly added to the beauty instead of distracting from it. These hardened miners, we decided, were truly the first Colorado mountaineers. They pioneered the way into these awesome places in more ways than one: literally by constructing the roads we present-day climbers use to access them, and yet also by filling in the blank corners of the map that these mountains once guarded with recalcitrance. 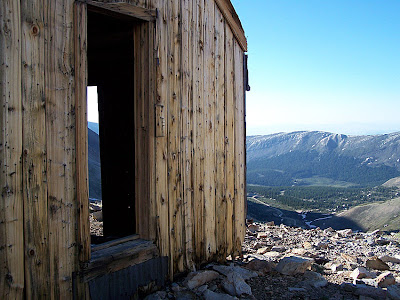 The next part of the climb entailed a steep snow ascent to the saddle between Mt. Sherman and its 13,748’ neighbor Mt. Sheridan. The short climb was steep and icy, so we took a moment to strap crampons back on our feet. With these stainless-steel teeth to provide traction, the icy ascent was not a problem.

more mining detritus (the snow climb to the Sherman/Sheridan saddle visible in background): 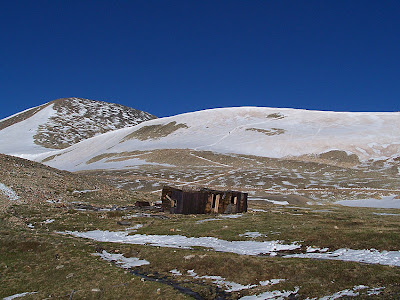 Once on the ridge, we had reached 13,120’, and the unfortunate truth of the climb was immediately evident: we were in for another gusty summit attempt. Down in the bowl on the south side of the mountain, we had been sheltered from the worst of the wind's force. Exposed now on Sherman’s west ridge, we could tell that it was only slightly less intense than the day before.

From the saddle, the 900-foot climb to the Sherman’s summit was revealed before us. The climb looked strenuous but passed fairly quickly. At about 13,700’ there was one exposed section where we had to navigate around short gendarmes of rock with icy, hardpack snow jammed into the crevices between them. This short section gives Sherman its class II rating and proved quite intimidating. To the north were impressive views of the southern Mosquito Range and a thousand+ foot drop (at a steep fifty-degree angle) into the Iowa Basin. One tiny slip could easily lead to a vicious tumble. Though not as severe as the day before, the wind added considerable excitement to this section. Excitement that, still gun-shy from yesterday’s thrills, I wasn’t quite prepared for mentally. As a result, I fell into a let’s-get-up-this-and-back-down-as-soon-as-possible climbing mentality.

looking back on the crux section of Sherman's route (note the steep drop-off to the right): 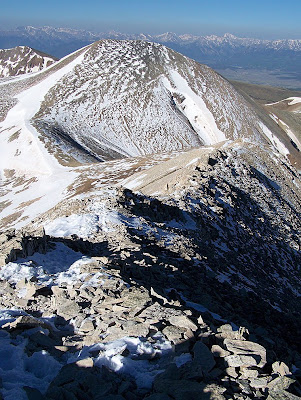 Luckily, Sherman’s long, rotund summit appeared just after this spooky section, and we reached the summit cairn with the morning still young. Much like yesterday, I didn’t feel much into standing on the summit, and we spent just enough time on top to snap off a few pictures before beginning our descent back down.

the view to the north from the summit: 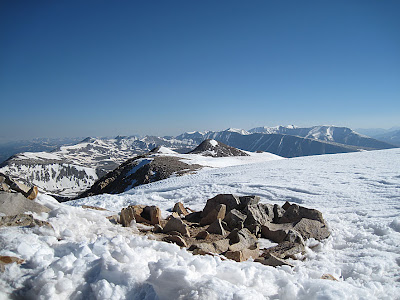 On the summit of Mt. Sherman: 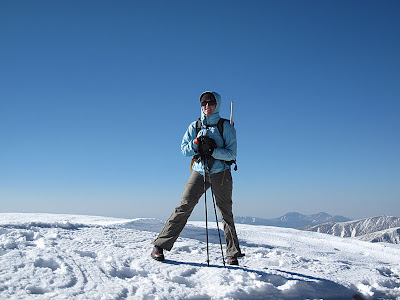 As usual, the descent went much faster and passed with minimal excitement. We did, however, note a disturbing trend: a general un-preparedness of the majority of the climbers we encountered on their way to the summit. We saw everything from a family with kids easily under 12 years old donning sneakers, blue jeans and possessing no water, to an entire group of fifteen or more, each as ill-equipped as the last. Though Sherman (like most of the Tenmile-Mosquito Range mountains) has the reputation of being an “easy” fourteener, any mountain this high demands to be taken seriously. It is “casual” climbers such as these that get into trouble and give mountaineering its “extreme” reputation. Surely, with a dry trail on a hot day in July, Sherman is a Mecca for climbers of this sort, but the conditions today (with the ice and high wind) made this ascent challenging and potentially dangerous. I couldn't fathom exposing a young child to these conditions without even the protection of basic mountaineering accoutrements. 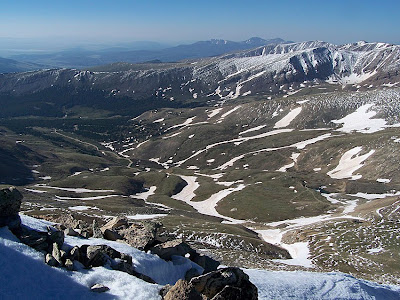 At the end of the day we were glad that we’d decided to climb, and (with defiance to the accursed wind) had had yet another amazing mountain experience. Each mountain has a unique personality, and climbing a variety of them is far more enlightening than climbing a single favorite over and over. 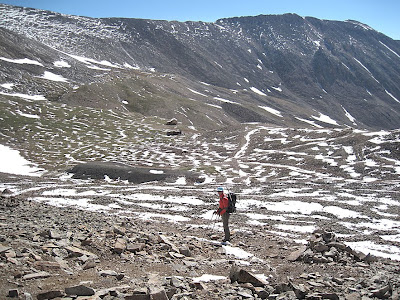