The world-famous Maroon Bells were reflected perfectly on the placid surface of Maroon Lake. Every detail rendered in full high-definition, though upside down, in front of us: the twin summit, the rusted-red color, the U-shaped glacial valley frame. Even the cotton-ball clouds high overhead were perfectly visible on the still waters of the lake. We shrugged on our packs, grunting as the weight of seven days worth of clothes, food and gear settled onto our shoulders. Yanking the straps tight, I took one last look at my car. If all went well it would be over a week before we saw it again.

“Woo-hoo!” my fiancée Ella agreed. We paused to take a photo of the classic Maroon Lake vantage, without a doubt one of the most photographed spots in the state. After a few final adjustments to our backpacks and a sip of water, we started up the trail.

Going clockwise, we started up the Maroon Creek basin, camping the first night at the base of Maroon Peak not far below treeline. After sitting out a short rain shower in our tent, we spent the evening swinging in our backpacker’s hammocks, watching a marmot scamper though the talus by the creek’s edge. A pair of dippers—one of my favorite Colorado birds—jockeyed for the best rock to use as a diving board for their dinner search. Lazy clouds swirled around the peaks above us and half a dozen mountain goats could be seen working slowly down the slopes of the mountain to the valley floor. As evening faded into night, the glacial-carved valley was cast in colorful shafts of light. 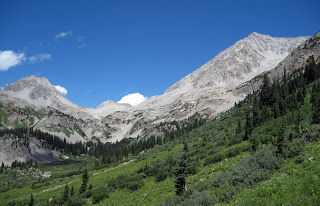 The next day entailed one of the most difficult sections of the journey: Maroon and Frigid Air Passes. It was nearly noon by the time we reached the boulder-strewn saddle at the summit of Maroon Pass, which was busy with hikers, backpackers and even a bachelorette party traversing from Aspen to Crested Butte. We eyed the swelling clouds, gauging the chances of a thunder shower. Almost a thousand feet above treeline, this was no place to be should the weather turn.

Two hours and 2.5 miles later we had descended down the other side of Maroon Pass and re-climbed to the top of Frigid Air Pass. The Fravert Basin, one of the quietest and most remote corners of the 4-Pass Loop, spread out below us in a sea of blue columbines and other multi-colored flowers. The backside of the Maroon Bells, a sight reserved only for those who venture this deep in the backcountry, towered above. That night we camped just upstream of a two hundred foot waterfall.

Though in normal seasons the Four Pass Loop requires no particular technical expertise, there are several special considerations to bear in mind when undertaking this grand adventure. There are several stream crossings that can be treacherous in the spring and early summer. Some people bring special shoes just for the task, others prefer to go barefoot. On this topic, the Forest Service states on their website that “sandals or boat shoes are strongly recommended. Wading barefoot can be extremely dangerous. Be sure to unbuckle your pack when navigating any stream crossing.” It is also important to remember that strong thunderstorms are common in the afternoon at these high altitudes, and to avoid the danger of lightning strikes you should do the bulk of your hiking before noon and avoid the high passes above treeline if the weather is building. It is also required that dogs are leashed at all times in the wilderness area, that group size is limited no more than 10 people and 15 animals, and that human waste is buried at least six inches deep and 100 feet away from lakes and streams.

Exhausted, battered, and footsore, we climbed up and over Buckskin Pass on day 8, the last of the four passes and the last major obstacle of the journey. One of the beautiful things about the Four Pass Loop is the sheer number of options available for customization. We augmented the route with side trips to Geneva Lake and the summit of Snowmass Mountain. By the time we reached the top of Buckskin Pass, we had climbed nearly 14,500 vertical feet, most of which with over fifty pounds of gear lashed mercilessly to our backs. Throbbing red slashed had been worn into my shoulders, and my heels and knees ached deeply.

When we reached our car at last, we were overcome by a conflicting torrent of sensations. The smell of gasoline and the sound of revolving gears had become alien, almost supernatural. It was a Saturday in peak season, and the popular lake was crowded with people. After so much solitude the sudden noise and confusion was overwhelming. We paused to look back on the Maroon Bells with reverence, knowing that we had circled around them and seen them from all angles. We had discovered a new respect for these amazing mountains.

(Note: this article first appeared in print in Vol. 8 Issue 3 of Our Backyard)

Posted by Writers on the Storm at 8:42 AM