Recently, there has been a highly publicized and controversial push to re-name the east summit of Mt. Sopris to John Denver Peak after the late Aspenite folk singer. While I don't know if I would call myself a fan of John Denver's music, I do enjoy many of his songs (as well as the Muppets Christmas, which I grew up on), and I appreciate what he has meant to the Roaring Fork Valley and to Colorado. Despite this, I am utterly opposed to the re-naming of Mt. Sopris's east summit on his behalf.
The reason for my opinion, and my subsequent rant, is that after living in Glenwood Springs for the better portion of my life Mt. Sopris has been a source of inspiration and admiration for me for many years. On a bad day, all I have to do is look up at Sopris's twin summits and I feel some relief. It is hard to explain to people who haven't lived in the lower Roaring Fork Valley what exactly Mt. Sopris means to us. MANY businesses have taken Mt. Sopris as their namesake. Even one of the local elementary schools is named Sopris Elementary. The eponymous Mt. Sopris is a totem and a treasure for us here in the Glenwood Springs and Carbondale area.

Sopris is a singular peak. When viewed from the north, Sopris is one of the largest and most prominent peaks in all of Colorado. The effect of re-naming this magical peak would be like splitting the mountain in half. No longer could you look up and see "ah, look at Mt. Sopris today" without feeling in some way incorrect. One of the arguments put forth by the petitioner is that the east summit is "unnamed". I promise those of you that may have less experience with the mountain that it does have a name, and that name is Mt. Sopris. 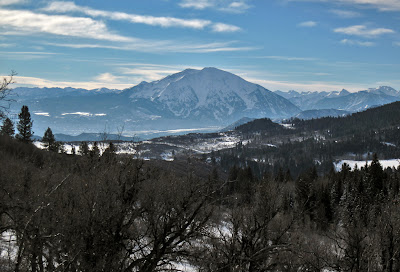 By most measures both the east and west summits of Mt. Sopris are of equal height (12,953') and thus BOTH are considered "Mt. Sopris". Many mountaineers summit only the east peak (the one in question) when they scale Sopris's long slopes. Though the peaks do fit the standard criteria in Colorado (300 feet of topographical prominence) to qualify as individual peaks, when one steps back it is clear that Sopris is one mountain. 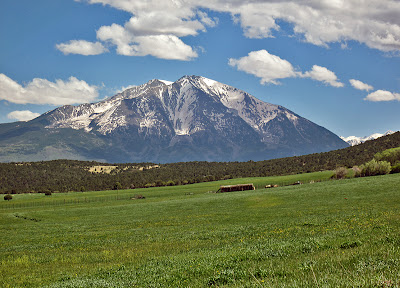 I suppose it is a pointless rant, as the likelihood of the U.S. Board of Geographic Names changing Mt. Sopris is slim, and even if such a change did occur, I suspect most of the people in the Roaring Fork Valley would never accept it (except maybe a few in Aspen, but in my mind they have no say as the mountain is not visible from their backyards). Let me say this, however. The individual behind the petition, whom I believe is from Denver, has claimed that the resistance to the proposal is based on the misunderstanding that they want to change the name of the entire mountain. This is not true. We here who this change will most effect understand their proposal perfectly. The other claim put forth (in a recent Aspen Times interview) is that the opposition is very small but very vocal. This couldn't be further from the truth. Of all the many locals I have talked to, almost all are outraged by this ludicrous idea, and if the petitioner could read the letters to the editor in the local newspaper it would be clear that the opposition is not so small.

Posted by Writers on the Storm at 1:22 PM