Mt. Shavano: Angel of the Sawatch 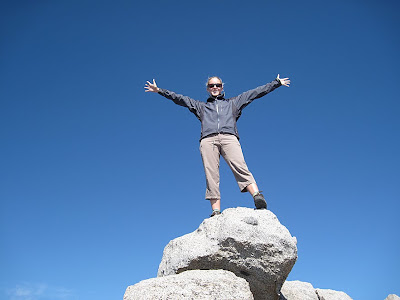 Today was very likely the most awe-inspiring and dramatic day we have had this summer. After a cold, stormy day yesterday in which we were side-swiped by numerous, malicious thunderstorms, we went to bed thinking it was unlikely that we would be able to climb today. In the morning, however, the skies were mostly clear, and we gave our day the go-ahead, hoping to out-pace the usual development of afternoon weather. If they metastasized as they had yesterday (and they were supposed to by the weatherman's predictions), we wanted to be as far away from Shavano's high ridges as possible.

The first part of the climb was not much different than any other: a long approach through a beautiful forest with a bouquet of pine and other flora exacerbated by fresh-fallen rain. These early morning jaunts never get old and would be worthy hikes in their own right. Though we were troubled by the usual early-morning struggles (exhaustion, cold, stingy eyes, burn-out), by the time we reached treeline we had settled into our rhythm for the day.

Shavano's east-facing basin is a beautiful, lush place and home to one of the Sawatch's more colorful legends: the Angel of Shavano. The Angel myth stems from old Native American folklore in which a tribal princess, in a time of great drought, sacrificed herself in the hopes of appeasing the gods to provide much-needed moisture. The princess than reappeared each successive year on the slopes on Mt. Shavano in the shape of a woman with two arms outstretched towards the summit. Every spring she sacrifices herself, sending life-giving water to the valley below. Though her northern arm/wing was melted, the angel provided us company for the better part of our climb.

Just above treeline we had one of the more amazing experiences of our summer to this point: a close-encounter with a herd of bighorn sheep. The herd was on their way down the mountain as we were on our way up, and, as fate and the angel would have it, our paths crossed within fifty feet of each other. There were at least a half-dozen lambs in the heard, rendering the mothers cautious, but nonetheless they offered us a unique display of the majesty of nature's womb.

Part of the bighorn herd, cautiously crossing the trail: 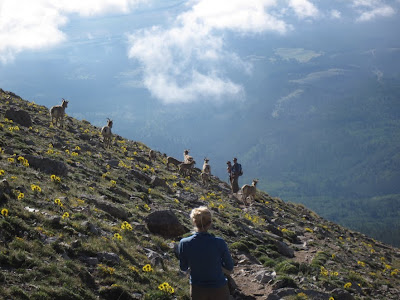 one of my favorite pictures, the bighorn and the fog: 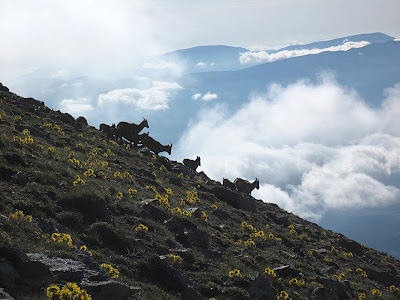 A short video clip of the bighorn (I apologize for the shaky quality):


The spectacle of the bighorn was enough to end any lingering morning stiffness, and we accomplished the rest of the climb in high spirits with our desire for a display of natural beauty thoroughly satiated. The angel, however, had a few more surprises underneath her halo.

At the top of Shavano's basin, we reached the 13,300' saddle between Shavano and her 13,630' companion peak "Esprit Point". This was a colorful, lush place with thick, high-alpine grasses and an armada of multi-colored, multi-shaped flowers. Shavano is not one of the craggy, rock-strewm peaks more resembling Frodo's Cracks of Doom. It (except for its highest reaches) is an ambrosial wonderland, teeming with life. The final scramble to Shavano's summit was tedious but not overly difficult. 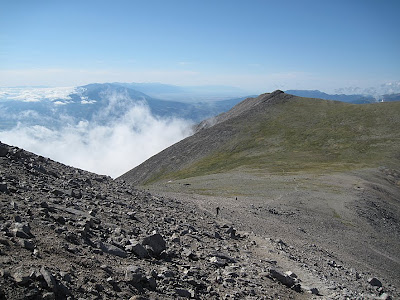 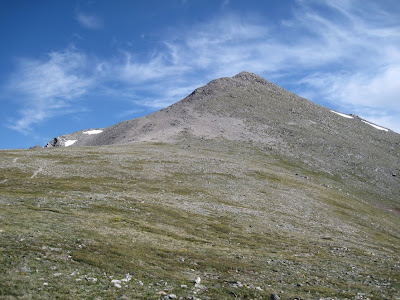 We reached the summit around 9:30 am. High on top, it was a clear day, but a boiling, beautiful blanket of fog was raising up the mountain slopes from the valley below. Nature provided us with a dramatic show as the fog lifted with dramatic, convective action. We got an amazing, eye-level dissertation on cloud development and lingered in awe too long, perhaps, as the clouds turned quickly into towering thundercaps. Because of this rapidly building weather situation, our pattern of not completing our multi-summit traverses continued and progressing on to Tabeguache (pronounced tab-uh-wash) Peak, as per our original plan, was out of the question.

fog building to the northeast: 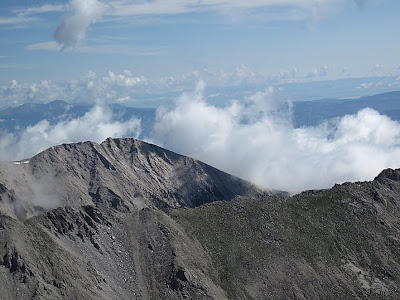 me on the summit with clouds/fog growing: 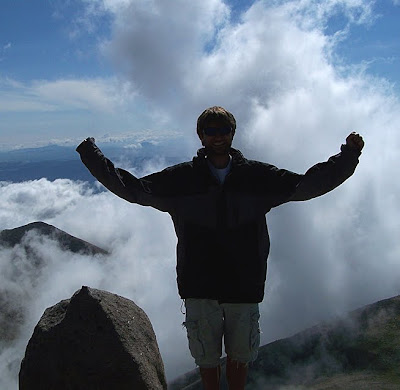 Ella on the summit: 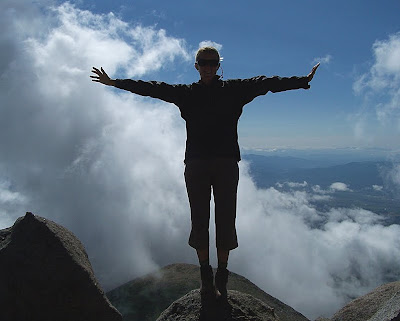 On the descent we dropped down from the high ridge into slippery, tendrils of fog. I had the distinct impression that we were hiking through the mossy hills and mountains of Scotland. It was admittedly intimidating, however, as the playful clouds had developed into an ominous storm. We passed several groups still on their way to the summit and tried to offer them encouragement to reconsider. Most of them, despite clearly knowing better, decided to continue. We pondered their fate later as stout crashes of thunder pursued us down the mountain's final slopes. We, for one, were thankful to be below treeline, heading downward....

The two of us near the summit together: 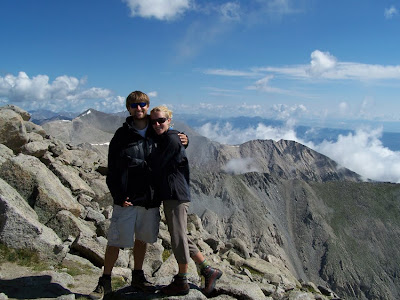 Posted by Writers on the Storm at 8:33 AM