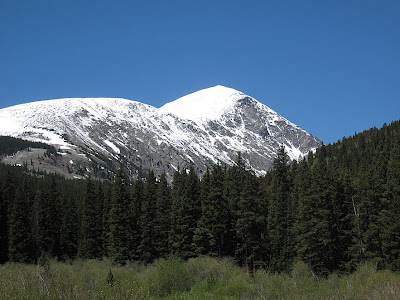 After two days of relentless clouds, rain, and snow, we were surprised to wake Tuesday morning to perfect, crystal-blue skies and zero wind. After a bagel and some tea, we drove the half-hour to the Quandary Peak trailhead on the north side of Hoosier Pass. We were the third car to arrive, and two other groups were preparing in the early-morning light as we strapped on our shoes and tightened up our jackets for the long day.

Ella excited for the first climb of the season: 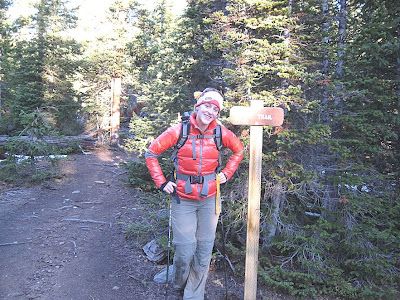 For the first two miles we leap-frogged with the other two groups and spent some time getting to know them during short rests. It was a chill--though beautiful--morning. The rising sun cast pearls of light on the slopes of nearby mountains, all of which were covered in fresh accumulation from the past two days. We found ourselves de-layering as the day grew warmer and our bodies generated heat.

Here I am after shedding my jacket, still trying to wake up and keep the rising sun out of my eyes (Quandary is in the background and still quite far off in the distance): 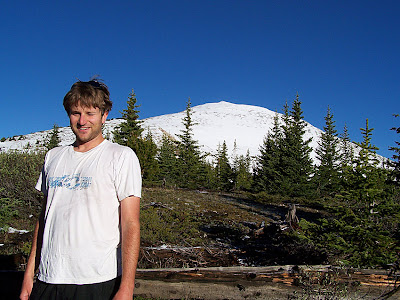 At 12,000' we climbed past even the hardiest, high-altitude trees and began trudging through the snow, which was the standard for the rest of the climb. We climbed our way up the tortuous switchbacks that led to Quandary's east ridge. Ella and I both remarked how great we felt and how easy Quandary was.

The view up Monte Cristo Basin off Quandary's south side from around 12,500': 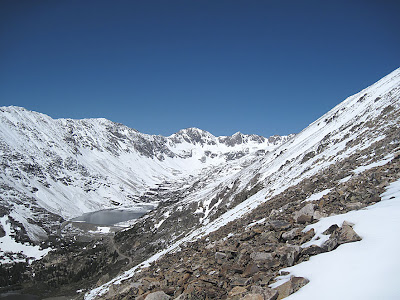 At 13,000' the trail level out and offered a brief reprieve from the otherwise relentless climb, but the main challenge loomed before us: the last 1,200 feet which ascended steeply through un-tracked snow. We overtook our new friends for the last time and began hiking up the final, daunting pitch. 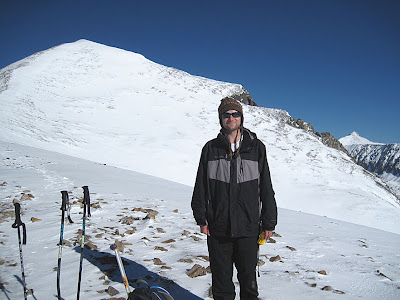 Somewhere around 13,500' the thin air began to take effect. I fell into my standard, super-steep climbing pattern of counting out forty steps on one foot, taking a short break, and counting out forty more. It was brutal terrain, and Ella and I (now out front) were breaking trail. This forty-step routine helps me to break the mountain into edible-sized pieces and gives my mind something to focus on other than how difficult climbing at this altitude is. It seems best not to think about how much climbing you still have to accomplish. Focusing on just forty-steps (well, eighty if you count both feet) keeps me from getting overwhelmed by what is still ahead. Slowly, steadily, we progressed towards the summit.
I couldn't help, at this point, but remember how not long before I'd dared to call Quandary the easiest 14er I'd ever climbed. It now seemed funny that I had allowed myself such a thought since I hadn't really climbed it yet. Quandary has a reputation as being on of the easiest 14ers, and perhaps I too-easily bought into that notion. Though, ultimately, it may be true, it dawned on me as I struggled up this last thousand feet that there is no such thing as an easy 14er (driving up Evans or Pikes discluded).
From somewhere along the relentless final pitch: 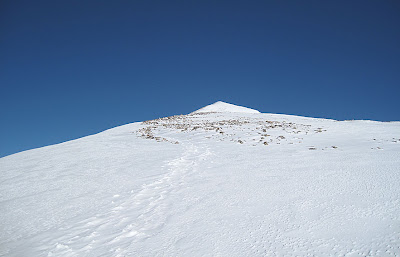 Finally, we reached 14,000' and decided to sit and take a longer break. The summit was tantalizingly close yet frustratingly far. We ate a granola bar and gave our legs a rest before starting up the final summit push.

Me on the final push to the summit: 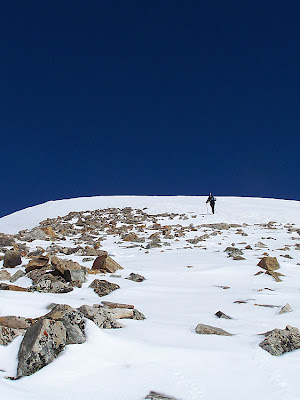 The final push was easily the hardest climbing of the day. The snow was deep and hadn't been touched for days. It was a fight to get a full breath at this altitude. I found it difficult to even make my forty steps. Twenty-five was all I could manage before keeling over my ski poles and gasping for air. With a few more climbs, I hope, this will improve. Though it was only 1/4 of a mile and 250 vertical feet, the climbing was slow going. Finally, after three and a half hours of climbing, we made the summit.

Ella making the final heave to the summit: 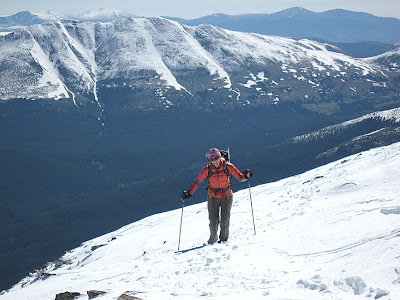 As usual from the summit of a great mountain, the views were simply amazing. We could spot some familiar peaks. Lincoln, Cameron, Democrat, and Bross were visible to our immediate south (we'll be comin' for ya soon!), Pikes Peak could be seen off to the southeast, the Maroon Bells, Pyramid, Capitol, Snowmass, and even Mt. Sopris could be seen far off to the west. We could also see much of the northern portion of the Sawatch range. It was still a cloudless blue day, and there was no wind. Neither of us could remember the last time we were on a summit with no wind.

This was the view to west from the summit (note the small but distinct shape of the Maroon Bells in the distance in the center): 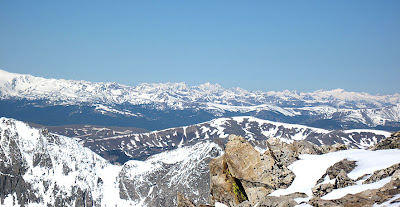 And here was the view to the north: 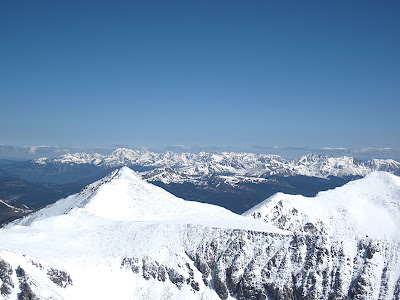 There were very few exposed rocks on the summit, and therefore no place really to sit. So we stayed for a few moments, snapped off the obligatory summit-victory photos, and began our descent: 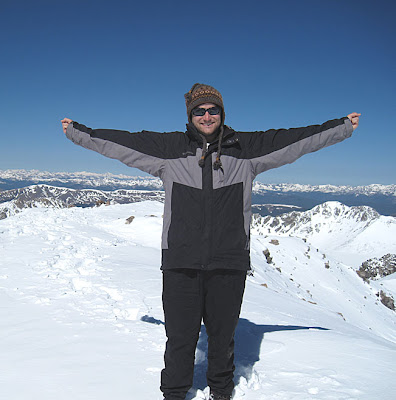 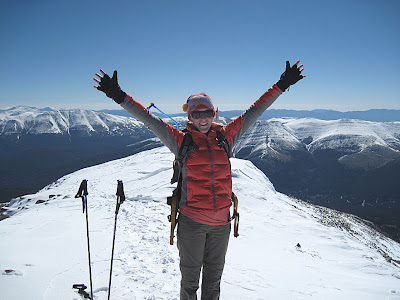 The descent was, of course, much faster and easier than the ascent, and we passed numerous groups still on their way up. It was a particular source of pride to me that we were the first on the summit today. Not that climbing a mountain is a race, but I was encouraged that we had climbed so solidly on our first mountain of the season. Many groups were eager to ask us how much farther they had to go. In the cases of the parties still quite far down the mountain, we had to gently break to them the bad news. Several groups thanked us for breaking trail or "kicking steps" for them.

At the end of the day we were tired but not exhausted and headed to Breckenridge for a sandwich. We were pleased with the perfect day and glad to check the first of many fourteeners off our list.

Posted by Writers on the Storm at 1:27 PM