The Four Sacred Peaks of the Navajo

The Four Sacred Mountains of the Navajo once formed the four boundaries of the Navajo People. One peak was accorded to each direction. This former region, known as the "Dinétah" was far larger than the reservation they have been given jurisdiction over today. Also attached to these peaks were other religious and social connotations. Two of these peaks are located in Colorado, including the famous fourteener we now called Blanca Peak.

Here is a description of each of the Four Sacred Peaks, a brief look at their history and symbology from the perspective of the Navajo as well as their place in the modern mountaineering canon. 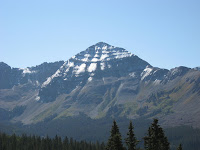 NORTH
Hesperus Mountain (13,232')
The Sacred Peak of the North is Hesperus Mountain, or Dibé Nitsaa in the traditional language which means "Big Mountain Sheep." Dibé Nitsaa was said to have been assembled from Black Jet, a gemstone and precursor to coal, and fastened down with a rainbow beam for peace and harmony. It is said to represent the coming of darkness and to protect the people from danger and evil.

Today, Hesperus is Colorado's 451st tallest ranked peak. Though not a common mountaineering challenge, it is a worthy endeavor with 2,852 feet of topographical prominence (23rd in the state). It's easiest route is a moderate but significant route with around 3,000' of elevation gain and is rated a modest class 2 with short bits of nearly class 3 scrambling. 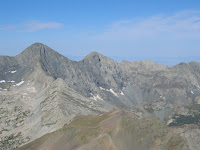 Blanca Peak (14,345')
The Sacred Peak of the East is Blanca Peak, or Sisnaajini, which translates to Black Belted Mountain. Since it is in the east, the direction of the sunrise, the mountain was thought to determine the orientation of a person's mind each morning. Traditionally, the doors of Navajo hogans also faced east.

Blanca Peak is the highest and probably most famous of the Four Sacred Peaks. It is Colorado's fourth-highest mountain, and one of the 53 ranked peaks above 14,000 feet. The standard route on Blanca Peak is a long climb, but only rated class 2. Reasonably athletic people should have no difficult climbing it.

The Sacred Peak of the South is Mount Taylor near Grants, New Mexico. Mount Taylor is the lowest of the four peaks and probably the least well known. In the native tongue, it was known as Tsoodzil, or Turquoise Mountain. The mountain was said to be made of a turquoise blanket, and female imagery and the color blue are woven into many aspects of its mythology. It was decorated with female rain.

Mount Taylor is an extinct volcano, and from a mountaineering perspective perhaps the least interesting of the sacred mountains. The hike to the summit is a short, 4-mile trek that should take no more than a few hours. It is class 1. 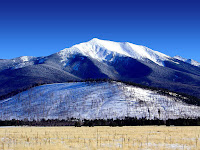 The Sacred Peak of the West is Mount Humphreys, the tallest of the so-called San Francisco Peaks. The Navajo name for the peak is Doko’o’osliid, or Abalone Shell Mountain. Legend tells that it was made from an abalone blanket to create an understanding of life and social unity. It was anchored with sunbeams and covered with a blanket of yellow cloud. It was decorated with male rain.

Humphreys Peak is the eroded remains of an ancient stratovolcano. It is the highest peak in the state of Arizona and thus one of the 50 state high points. It is a massive and ultra-prominent peak, the 26th most prominent mountain in the Lower 48 with 6,039' of topographical prominence. The standard route is mostly class 1 with a few short sections of class 2 but is a significant journey requiring most of a day to complete.

SOURCES
Navajopeople.org- Brief descriptions of each peak and short lessons in their symbology and definitions.

Summitpost.org- Descriptions of the routes of each of the mountains.

Posted by Writers on the Storm at 4:28 PM