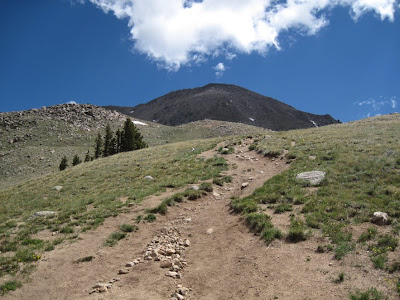 As the two of us had just climbed 7 fourteeners in the past 12 days alone, Mt. Yale offered a different kind of experience for us as we were joined on the climb  by a relatively large group of friends. We decided on an early rise: 4:30 am. This, we figured, provided ample time to head-start the crowds of Fourth of July weekend. When we arose, however, we were greeted by a smother of gray clouds and several waves of cold rain that forced us to retreat to our tents and re-think our plans. We reset our alarm clocks to 6:00 for a second evaluation.

Rising for the second time, it turned out, was mysteriously more difficult for most of the members of our group, but a pale-blue blanket hovered above us: not a cotton-ball or mare's tail in sight. This troubled collision of good and bad weather proved to be a lingering theme for the day.

Once on the trail we all settled into our own paces, and I found myself, after only a switchback or two, alone with my thoughts. This separation persisted all the way to Yale's summit where we were eventually reunited.

The hike up Yale is long, but not as long as some of the others in the Sawatch Range. It is relatively short, in fact, when compared to Missouri or Harvard. After several miles of mostly moderate elevation gain, the trail steepened and emerged from the trees. Yale's southern ramparts came into view at last. As is true of most Sawatch climbs, the view was spectacular. 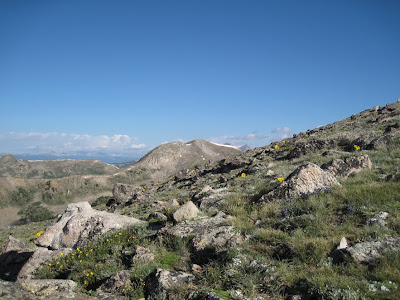 As I climbed the last switchbacks through the scree to the saddle of Yale's west ridge, it was apparent that solitude was not going to be a part of the day. A trail crew twenty members strong was hard at work reinforcing the switchbacks to battle the erosion caused by too many boots. A dotted line of climbers also graced the slopes both above and below me.

The wind was swelling and had a winter-flavored bite that I had not anticipated. I grudgingly conceded that I was under-dressed for the occasion. By the time I reached the summit ridge at 13,800', my hands and face were feeling the first tingles of numbness.

The final scramble to Yale's summit was, similarly to Harvard's, surprisingly tricky. A miscalculation in route -inding found me staring down a short but intimidating class V cliff. Upon backtracking, however, an inconspicuous but easier class II route opened up through the boulders on the ridge's west side. Such miscalculations, I observed, were common on Yale's summit ridge, and I found myself coaching others who made the same mistake as me to the right path.

After finall attaining the summit, I sat under-dressed but still somehow enjoying the troubled weather of the morning. Dark masses of clouds built with remarkable speed overhead and soared east towards Buena Vista. The swelling clouds hung low, almost close enough, it seemed, that an outstretched hand might be able to scrape their bottoms. Mt. Harvard to the north and the Three Apostles to the northwest hid their heads in the clouds, giving them a rugged, malevolent appearance.


Half an hour after arriving, I decided that I could wait no longer for the rest of the group to catch up, so I began my descent. As I should have anticipated, I encountered the others at the bottom of the summit ridge and was goaded into climbing back to the top for group photos. Though the wind was reaching a crescendo (recalling without quite rivaling our horrible day on Mt. Lincoln) the late arrivals were not keen to leave the summit quickly, so I spent another half an hour on top under-dressed and over-cold.

Once everyone had had their fill of wind and scenery, we began the long descent back to the trailhead.

Posted by Writers on the Storm at 8:00 AM